We draw inspiration from the great saint Tirumoolar as his verses are the benchmarks for Yoga and all concerned esoterics.  My master and guide Siddhar Govindaswamy comes from this lineage from St. Tirumoolar.  He used to quote profusely from St. Tirumoolar and asked me to study Tirumoolar's 3000 verses of the Tirumanthiram deeply and continue to practice Yoga according to the tenets as enunciated by St. Tirumoolar.

Our lineage can be traced all the way back to this great sage,  The Yoga I teach is according to his method.

The Attanga Yoga (The Eight limbed Yoga) has been dealt with in lucid terms by the Saint and they are the rich resources for the humanity to be guided.  Tirumoolar also teaches us on medicine, astrology, anatomy, physiology, psychology, parapsychology, astral travel, and whatnot. 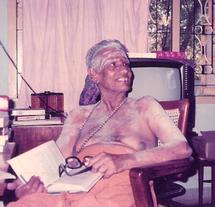 Siddhar Govinda Swamigal is the founder of Shri Murugan Ashram West Rampart Tanjavur.  I was Deputy Collector, Tanjavur (1973-1975).  Swamigal graced me, initiating me with the serpent power.  He also taught me other nuances of the esoteric science.  He was an adept in Solar Yoga.  He was a bachelor throughout.  I was helpful to him to build the temple and ashram.  When I met Swamiji for the first time he was meditating under a bush.  Serpents were wriggling around him.  He was unconcerned and calm.  He great Siddha Purusha.  He also practiced Siddha medicine freely for the people.  Swamiji also initiated all of my sons in Power Yoga.  Whenever anyone visiting the ashram, they would be fed by him.  He was an exponent of th penance of giving food freely.

Swami Valayapati Siddar Swamigal M.A; L.R.C.P (Vienna) who lived for 110 years. Swamiji taught me LUNAR YOGA while he was in tapas at the foot of POTIYIL Hills at Sambavar Vadakarai. I was then DEPUTY COLLECTOR Kovilpatti Tinnevelly District - 1974 to 1976.

Swamiji was in SUBASH CHANDRA BOSE's Army as The Chief Medical Officer. When he came to India he assisted Dr Soundaram Ramachandran of Gandhigram in Asharam activities.

Swamiji's Samadhi is in Bangalore at #52 8th Cross road, Nallappa Reddy Colony, B. Channasandra, Bangalore 560043. Ramakrishna Iyyer is the Trustee. Interested people can have darshan. His phone 9632182552. The Kaliyuga's atrocities will be mitigated by the grace of this one of the greatest yogies of 20th Century.

To KaviyogiDr.P.Pandian,The Cosmic Mother revealed Herself ,on 18th March Friday 1960 Full Moon Night,when he was on death bed at The Government General Hospital Chennai.The Cosmic Mother revealed Herself to him as the Ineffable OM(The Logos) and smokeless pure light as if a cloud burst of a million suns.Dr.P.Pandian was found cured of his ailment ,by the divine power as if descending from the Cosmos.He felt surcharged with divine vibrations activating his every cell in the body and he was floating on a sea of ambrosial bluish white efflorecence.

His cure was confirmed by medical tests by a team of physicians and technicians under the lateDrSadasivam ,famous thorasic surgeon.

The archives are available for further study and research in the hospital records.kaviyogi Dr.P.Pandian has also documented and has mentioned it elaborately in his books published by Leading publishers.

This esoteric experience he wanted to share with all in the world who seek enlightenment,purely on scientific line based on Reason,sans dogmas and blind beliefs.He then studied Tirumular extensively and was waiting for a spiritual Mentor who could correctly guide him.It happened when he served as The Revenue divisional Officer/cum sub divisional magistrate,Thanjavur during 1972 to 1974. It is seen he had to wait for 12 years to find the Competent Guide.

Siddar Govindasamy took him as his disciple and taught all the nuances of yoga,advanced yoga,astral travel etc.according to Siddar govindasamy St Tirumular is the source of info on esoteric subjects.